Whether it’s the songs and the dancing, the music videos and concerts, or the idols themselves, it’s fair to say that K-pop fever is easy to catch. As well as the great entertainment value though, K-pop can also be a fantastic aid for those learning Korean.

As you can imagine, Korean pop music has been around in Korea for a long time, but it’s only in the past decade or so that it’s made significant inroads into the mainstream music world.

K-pop had its own episode on American television series “Glee”, additionally, there were two K-pop performances at the closing ceremony of the 2018 Winter Olympics in Pyeongchang and let’s not forget Psy’s 2012 satirical earworm “Gangnam Style”.

Some of the biggest groups right now include boy bands BTS and Exo, as well as girl groups BlackPink and Twice. In reality, there are actually more than 300 groups.

And while other music genres have their fair share of passionate followers, K-pop fandom is on another level. Made up of millions of mostly teenagers and young adults, K-pop fans are fervent devotees of their favourite groups – so much so that it’s basically its own culture with its own language. Got a favourite member? You’ve got a “bias”. See a K-pop idol acting super cute? They’re being “aegyo”.

The growing popularity of K-pop has, unsurprisingly, led to an increase in interest in the Korean language. 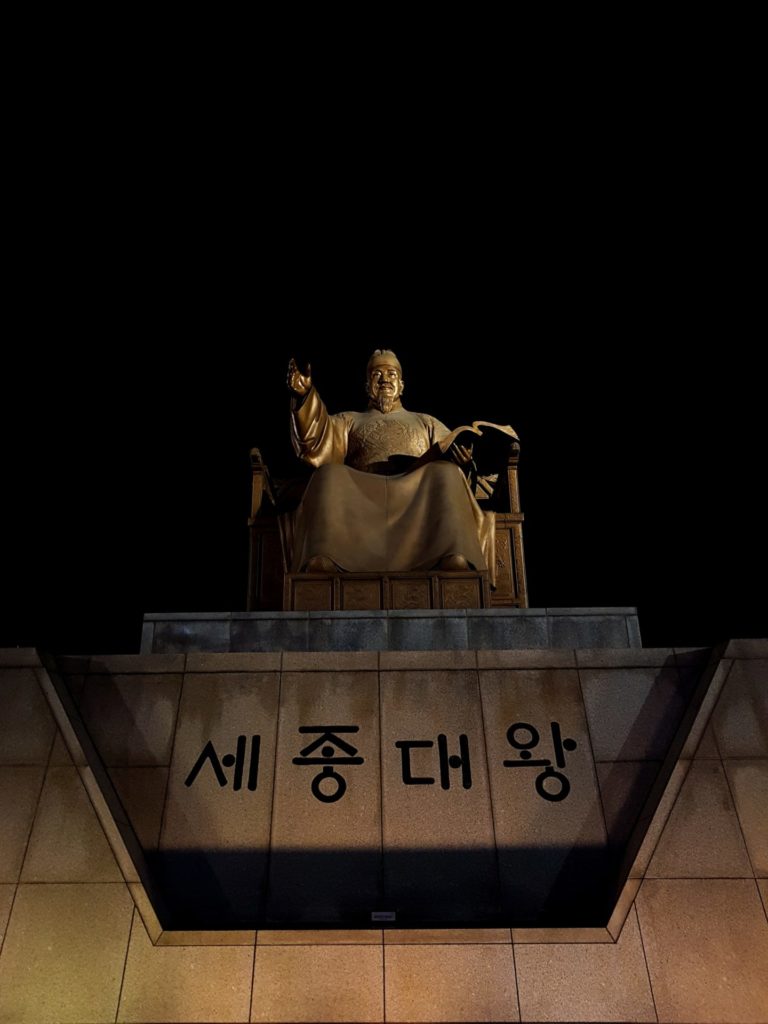 King Sejong the Great: Inventor of Hangul, the Korean script.

Between 2013 to 2016 Korean and Japanese were the only languages taught at American universities that experienced growth in the numbers of students enrolled, according to the Modern Language Association of America. As of November 2019, Korean is one of the most popular language courses available on Duolingo, a language-learning website and app, with a massive 4 million learners.

Korean pop culture is driving interest in the language. With the Internet, the reach of all things Korean is more extensive than ever before so it makes sense to use K-pop to help with learning the language.

Words like 싫어 (Dislike) and 좋아 (Like), 사랑해 (Love) and 미워 (Hate) may already sound familiar to you. Other words that regularly frequent K-pop songs are 친구 (Friend), 어떡해? (What should I do?), 예뻐 (Pretty/Beautiful). With many K-Pop songs being about love and relationships, life and loss, K-pop listeners can continue to build vocabulary through their favourite songs.

This website uses cookies to improve your experience while you navigate through the website. Out of these, the cookies that are categorized as necessary are stored on your browser as they are essential for the working of basic functionalities of the website. We also use third-party cookies that help us analyze and understand how you use this website. These cookies will be stored in your browser only with your consent. You also have the option to opt-out of these cookies. But opting out of some of these cookies may affect your browsing experience.
Necessary Always Enabled
Necessary cookies are absolutely essential for the website to function properly. These cookies ensure basic functionalities and security features of the website, anonymously.
Functional
Functional cookies help to perform certain functionalities like sharing the content of the website on social media platforms, collect feedbacks, and other third-party features.
Performance
Performance cookies are used to understand and analyze the key performance indexes of the website which helps in delivering a better user experience for the visitors.
Analytics
Analytical cookies are used to understand how visitors interact with the website. These cookies help provide information on metrics the number of visitors, bounce rate, traffic source, etc.
Advertisement
Advertisement cookies are used to provide visitors with relevant ads and marketing campaigns. These cookies track visitors across websites and collect information to provide customized ads.
Others
Other uncategorized cookies are those that are being analyzed and have not been classified into a category as yet.
SAVE & ACCEPT